Expedition vehicle Mowag Bucher Duro 6×6 Well, it’s done. After detailed market research we have decided to go for a Mowag Bucher Duro. This Swiss guy has spent the last years of his life in the UK and has now returned to mainland Europe. Built in 2005 and just over 6,500 kilometers on the odo, it has not even really retracted …. Our idea is to convert the Bucher into a motorhome. After the Roo and the Lion this will be our 3rd all-wheel drive motorhome. We found this gem at a British auction house, bought it and loaded this beau

ty onto a Polish 40 tonner. A truly European project :). In the following months I will post our plans, progress and setbacks and later on the first tours we are doing. The Bucher Duro / MOWAG 6×6 is a military vehicle, which was originally developed by Bucher-Guyer AG in Niederwenigen, Switzerland. Since January 2003, production has been relocated to MOWAG in Kreuzlingen. Since this car is a rather individual series, the community is also quite small. All the more, I underline the excellent Duro website maintained by Alexander, where the small community  can lively exchange. Thanks for this great work.

To start with some technical data: 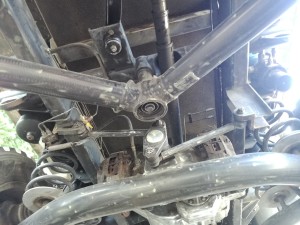 Let’s kick off! After the communication booth is now increased by 60 centimeters, the Duro has reached standing height. I will now bring the car to shine (and much is not to do at just 5000 miles mileage) and start with the overhaul of the subfloor. So up to the stage and once ground from below. At the same time I have such a nice view of the ingenious construction of the DeDion axles and the brakes. After sweaty 10 hours I sanded the entire subfloor and prepared for the primer. Next week, I’ll take a look at the art of professional painting … let’s see what I look like;).
It is finished. The Duro got a new “leggings”. Abraded, p 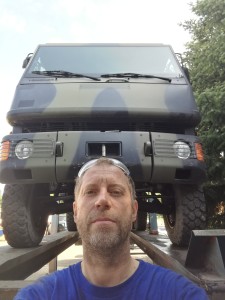 rimed and finalized with 2K paint. A bone work but the result can be seen … I think;). After the first structural descriptions, I want to make a short digression at this point, why it “because this time necessarily had to be a Duro”. Vehicle considerations, criticism, praise and so on are there about the various possibilities of action sufficient …. And as you can read here, we have also enjoyed a IFA W50 and Iveco already driven, are thus not a complete novice.

The decisive criterion was finally the moderate curb weight of 5 1/2 tons and thus the possibility to remain even after removal and with loading under 7.5 tons. So Michaela may operate this device. In addition, she can do it, because the Duro is easy to use. Was it at Iveco only possible to operate the clutch while standing still only using a telescopic arm to operate the “men’s circuit”, the Duro offers tidy, clear and with automatic transmission as light as a feather. Furthermore, with the Cormoran cab it is a self-contained system, which does not need an intermediate frame with the DeDion axles and remains narrow, flat, light and compact. Frame distortions and bellows considerations are now a thing of the past. Of course we pay for this compactness with some space. 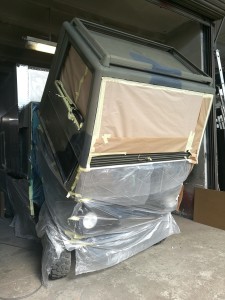 The interior is 1.80 meters wide and 4.50 meters long, a whole 4m2 smaller than in the Iveco, so 1/3 less space. Since we do not belong to the group of self-confessed purists, this requires a clever interior design for compensation and also explains why carrier vehicles such as a 1300 Unimog or an 8.135 MAN were possible but not optimal for us.
What disadvantages do we accept for this? In addition to the just mentioned housing size, first of all a vehicle of the newer generation. This means that the slogan “Euro 0 and elektronikfrei” no longer applies. But from experience I know that in the meantime also enough workshops around the globe have clever boys, who always help further, where the own capabilities end. 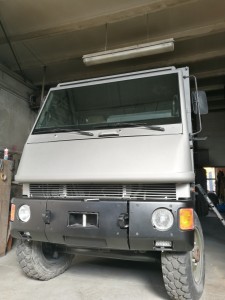 Furthermore, the lack of intermediate frame has the disadvantage that attachments to the frame are hardly possible due to the small space. In particular, the tank volume of 120 liters falls rather under the category “thimble”. Urgent reworking is necessary here and thus creativity is required. The same applies to a wastewater tank outside the cabin. For this I will put the exhaust in order to get additional space for a second tank and replace the standard tank with a larger one. 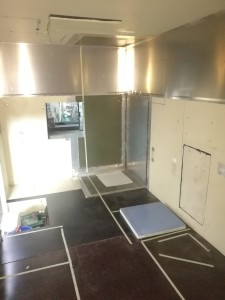 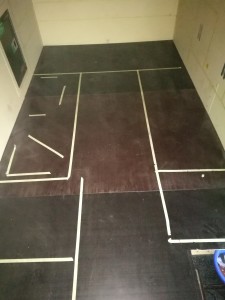 Not to the disadvantages is definitely the variant 6 × 6. The fuel consumption to a 2-axle is manageable but this one can continue with low preparations even with a highly-bonded axle plates. That should have been it.

Slowly it progresses. Somehow, there is always something to do, and as often happens once you start, it always takes much longer than planned. A big step is that we have agreed on the interior design. This now makes it possible to make the window openings and then to paint the case.

As you can see on the top drawing, we have chosen a more or less classic layout. At the rear we will place the 80 centimeter wide bunk beds across, so we regain some space and compensate for the shorter length of the container. We have also achieved a breakthrough in color and have agreed on the color gray aluminum – RAL 9007. To get a first impression, once the cab is tuned. I have already painted the bumper and side panel black. At the same time I have installed both LED reversing lights and auxiliary lights. Bright and visually appealing;).

The middle aisle will be overplanked by screen printing plates. Thus creates an 80-centimeter wide and 4-meter-long storage space in the interior of the vehicle in which we will positionthe 2 110 liters fresh water tanks. The additional space should be used for supplies and additional on-board equipment. But more on that later. In addition, I start by sawing the passage to the drivers cab into the wall. Although not very comfortable at 55 x 55 centimeters, we can fully exploit the structural features of the Duro and use the space under the roll bar as a spacious technical room. Now it can go to the exciting part – sawing the window openings…

The real glass windows I purchased from the Hungary company Metall99, great products at an unbeatable price. This are casement windows in the size of 100 x 50 centimeters. As ventilation for the beds, I have planned small sash windows and in the roof, I will install boat hatches from the company Vetus. They have already proven themselves in the Lion. I want to build the spare tire to the rear. For this I use the old tire holder, which was previously fixed the wheel under the roll bar. Some slight modifications and so I have a stable mount with little effort. I sawn, sanded, filed and measured a weekend … and almost finished the car for the final paint job. Also, the sand plates fit well. All I have to do now is think about which storage boxes I still want to bring to the outer skin. In any case, an aluminum box will come under the spare wheel. Here there are sufficiently stable mounting options, as the army had attached a power generator at this point. It’s getting slowly…

New robe 28.12.2017: It’s done! After over a week’s work, I finally have a newly painted car, the windows of Metall99 and the skylights of Vetus are installed, the spare wheel holder with the spare wheel is attached and the first storage box at the rear is in place. The headlamp grids are back from galvanizing and adapt well. 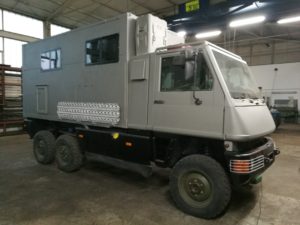 As always, it was a big tinkering , because especially around windows it needed some … adjustment. But rather additional  work than following the  motto: 3 times cut but still too short :). Now the Duro completely lost its military outfit and presents itself in a new shiny dress  in beautiful gray aluminum. Still the rims need to be painted  and then the NATO green will disappear. 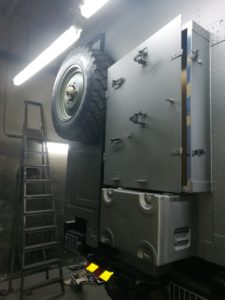 I also found a GFK box for the roll bar which will then be home to the 11 kg gas cylinders for our kitchen in the future. In addition to the already primed Zarges box on the roll bar is now room for another box. So I can compensate for the lack of space for storage boxes on the intermediate frame (since the Duro has no such …). Lack of outside only the waste water tank, the displacement of the exhaust and the larger tanks on both sides. But I will certainly have to invest a lot of thought before the implementation follows.

Oh, and also about the name of our new vehicle, there seems to be agreement: Fuchur. The friendly luck dragon from Michael Ende’s “Neverending Story”. In my opinion, a good choice of Michaela